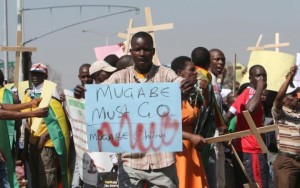 On July 6, Mr Chinamasa held what he called â€œmarathon meetingsâ€ with Lazard and another bank in London on a $1.1 billion loan.

Lord Mandelson has denied his visit was in any way linked to Lazardâ€™s proposed bail out. However, the timing of his meeting is likely to raise questions as within Zimbabwe the deal is highly controversial.

A spokesman for Lord Mandelson said he was â€œnot playing nor has he played any role in advising the Zimbabwean government either through Lazard or any other interestâ€.

The spokesman described the purpose of Lord Mandelsonâ€™s trip to Zimbabwe as being instead to meet â€œrepresentatives of the business community and civil society to encourage them to continue the process of reformâ€.

Catriona Laing, the British Ambassador in Zimbabwe, arranged his appointment with Mr Chinamasa and accompanied Lord Mandelson to see the minister. Sources said this meeting did not take place on behalf of Lazard, nor did it lead to any introductions.

Unable to pay civil servants or run its own ministries, Mr Mugabeâ€™s regime is desperately trying to raise $1.1 billion to settle its arrears with the World Bank. This would, in turn, open the door to a bailout from the International Monetary Fund.

Lazard is understood to be working with Afreximbank, a Cairo-based bank, to raise the loan.

Mr Chinamasa told Zimbabweâ€™s official media that his talks in London â€œcentred on the strategy which they have committed to putting together for us on the arrears due to the World Bankâ€.

He added: â€œThey have put together a syndication of banks to address the World Bank arrears. With this understanding and commitment from Afreximbank and Lazard, we are now definitely on course to fulfilling what we set out in our arrears clearance strategy. I can safely say that everything is now on course.â€

Lazard declined to comment on its dealings with Zimbabwe.

Bailing out Mr Mugabeâ€™s regime is intensely controversial in Zimbabwe. The 92-year-old dictatorÂ has led his country into economic calamity and political repression, allowing his allies to torture and murder opponents and rig elections.

Mr Mugabeâ€™s mass seizure of white-owned land wrecked Zimbabweâ€™s biggest export industry. The presidentâ€™s allies benefited from the land grab, including Mr Chinamasa and his wife, Monica, who received one farm each.

As for the wisdom of any bailout, one Zimbabwean commentator, who declined to be named, said: â€œWithout a change in behaviour by the government, we are going nowhere. And I donâ€™t think itâ€™s possible for the change to happen because the people in charge are the same. They donâ€™t understand todayâ€™s world.â€

Britain, America and the EU have imposed a travel ban and asset freeze on Mr Mugabe. Mr Chinamasa had the same pariah status until 2013 when his name was removed from the â€œpersonal sanctionsâ€ list.

But there are no sanctions on Zimbabwe itself, so lending money to the countryâ€™s government does not break any restrictions.