The Zimbabwe Football Association (ZIFA) has announced that it will be entering three national teams in the 2019 Africa Cup of Nations. Its present national squad and star players will be distributed among the three new teams. ZIFA believes that, by taking this step, it will greatly increase its chances of winning the Cup.” 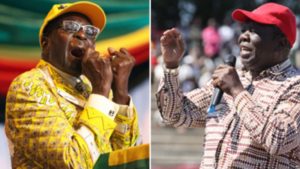 Sounds crazy? What would you think of the selectors if they did that? Yet that is exactly what the opposition leaders are doing in their bid to defeat Mugabe and ZANU-PF in next year’s elections.

You don’t need to follow football to know that a team playing like a single, cohesive, well-drilled unit will always win against a team that cannot pull together and runs around the pitch in a disorganised way – no matter how good its individual players may be.

In the same way, a well-organised and trained army will always defeat a disorganised rabble, even when the rabble is ten or more times its size. History has taught us this time and time again.

History has also taught us that exactly the same applies when the objective is to overthrow an oppressive government. If you want to win, you must present it with a solid opposition all speaking in unity and with one voice. A disorganised, split opposition cannot succeed.

Zimbabwe’s opposition is that disorganised rabble. Under these circumstances, anyone who is not prepared to join wholeheartedly into the opposition and help it act as one, is actually helping the oppressive government to win.

White Europeans have not always lived in wealth. Not so long ago, in their own countries, they lived in a situation where a tiny, very wealthy ruling elite kept the rest of the population in severe poverty, with many living in appalling slums, and suffering from disease, malnutrition and famine. And their governments were determined to keep their subjects in this condition, by force if necessary.

Does that sound like Zimbabwe today? You bet it does! Although, in fairness, few Western governments were as brutal and vicious as Zimbabwe’s today.

So what changed in Europe? How did its citizens get from extreme poverty to affluence, under conditions similar to those in Africa today?

Well, the first thing was that it was NEVER their governments that took their citizens from poverty to affluence. They were no more interested in doing that than Mugabe is. No, it was always a mass movement of the nation’s own citizens getting together in unified, irresistible body and forcing the government to do what they wanted it to do.

The opposition leaders knew that one drop of rain will achieve nothing, but enough drops of rain will cause a mighty flood that carries all before it. So it was vital that individual egos and personal agendas had to be subjugated to the Common Good, and by far the most important task of the opposition was to get the mass of citizens behind them. Otherwise they knew they would fail. And if one failed, then everyone would fail.

Zimbabwe’s opposition leaders do not understand that. Several of them believe one leader can succeed on their own, without the mass support of all Zimbabweans behind them. They have not studied history, or if they have, they do not think it applies to them. That is egoism gone mad, and they are deluded.

More than that, they are dangerous and, as things are going now, if Mugabe and ZANU-PF stay in power, these breakaway leaders will be entirely and 100% to blame, and I hope all Zimbabweans will recognise that, and hold them to account accordingly.

Western citizens also understood that a mass movement meant each individual citizen accepting responsibility for their own future, the future of their children and the future of their nation. They did that by playing the part the movement asked of them. Zimbabwean citizens don’t seem to understand that they, too, must become involved. One reason is that few people among the public or in the official opposition realise that the star player in this team is not the leader of any of the political parties or, indeed, any of the political parties themselves, it is the general public because without that, the leaders cannot succeed.

Time is running out for the opposition to turn itself into a united, well-drilled team. The best way to reach and mobilise the star player is through the Christian Churches, activists and special interest groups (such as women’s groups or those promoting Zimbabwe’s youth), Civil Society Organisations, the business community, the trade unions and all the foreign and domestic NGOs working in Zimbabwe.

Each one of these bears an equal responsibility with the opposition political parties for ensuring a united team speaking with one voice. They each need to break out of their individual bubbles of personal agendas and learn to combine for the Greater Good of Zimbabwe.

In other words, stop treating this as a political battle because it is not. It is a fight against oppression and poverty.

The Christian Churches are particularly important because, ON THEIR OWN, they are powerful enough in Zimbabwe to create and lead a movement big enough to dislodge Mugabe and ZANU-PF, and it’s about time someone got them to extract their digit because they have a responsibility under God and the Bible to fight for the oppressed, the weak, the exploited and the poor. And this they have consistently failed to do both pre- and post-colonialism, not just in Zimbabwe but throughout Africa.

Zimbabweans citizens can themselves force ego-led and self-interested leaders to be an integral part of the team by simply refusing to support them if they don’t. If a push against Mugabe and ZANU-PF is to succeed, sanity has to prevail. Citizens themselves need to decide how much they want Mugabe and ZANU-PF out. Enough to support the obvious leader and leading party of the opposition, or not, and whether they like them or not?

The choice is yours. Stick with Mugabe, or go with a new leader whom you may dislike and not trust, on the basis that he and they could scarcely be worse than Mugabe and ZANU-PF.

And one way you can protect yourself against a repeat of a repressive government is to insist that all opposition politicians and political parties make Agenda 2063 and its accompanying First Ten-Year Implementation Plan 2014-2023 the basis of their manifestos, as the AU has asked them to do.

This ensures that Zimbabwe (as all African nations) will be “driven by its own citizens” so you will no longer have a repeat of Mugabe and ZANU-PF. I am staggered that every Zimbabwean activist, campaign and special interest group, and Civil Society Organisation has not latched onto it and made it the focus of their activities.