Dozens of flights to and from Zimbabwe were delayed indefinitely on Saturday‚ leaving angry passengers stranded and deepening the diplomatic stand-off between the two countries. 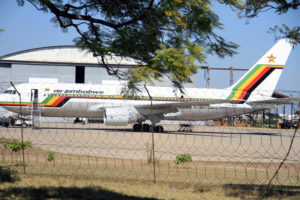 The are reports that yesterday that several Flight , including Harare-London and Harare-Johannesburg flights were cancelled because the airline could not meet its fuel obligation. Air zimbabwe is failling to pay their supplies- who were reportedly owed amount which is over a million dollars.

The furore began when an Air Zimbabwe flight to Harare and operated by Robert Mugabe’s son-in-law Simba Chikore‚ was grounded by the Civil Aviation Authority on Friday night for not having the correct permits.

At about 4pm‚ SAA cancelled its flights‚ while Air Zimbabwe flights were still listed as being delayed indefinitely.

Tired and angry passengers said they were receiving very little information on why their flights had been delayed.

Greg Linington‚ a lecturer in constitutional and international law at the University of Zimbabwe‚ said on Saturday afternoon he had come to South African with his wife to attend his uncle’s funeral.

“I’ve been here since 6am this morning so I’m pissed off. We were supposed to be flying at 9:30am (on Air Zimbabwe) but that hasn’t happened.

“Apparently there’s some dispute over paperwork‚ landing rights or permits or something. We heard negotiations are going on but there hasn’t been any progress at all. We’d like some sort of information but there’s just no information coming our way unfortunately. I wish they would tell us if it’s going or not. It’s just uncertainty. I’m teaching in Monday . The new semester is starting at the university so I have things to prepare.”

Memory Kadau‚ acting coordinator for the Crisis in Zimbabwe Coalition‚ said she had come to Johannesburg for the SADC conference and had also been due to fly back to Harare on Saturday on Air Zimbabwe.

“There’s a guy who works here and he came to us twice. He didn’t have enough information and I felt he was really arrogant in terms of accepting responsibility for the situation.

“They even ran away from checking us in because if they do then they have a responsibility to accommodate us. So we’ve just been sitting here. There were people who checked into a hotel close by and they were frustrated and shouting because there’s isn’t any feedback or updates. We can’t be sitting here – it’s cold. It seems like we’re not going to go anywhere.”

A Zimbabwean woman who did not want to be named said she and her adult daughter had been at the airport since 7am for their 9.30 am flight to Harare. They said no official reason had been given for the delay.

“We’re waiting because the tickets are paid for‚” the daughter said. Every time we ask‚ SAA just say it’s delayed and they are fixing things.”

Several other airlines also experienced delays. A British Airways staffer told a passenger “Mugabe has grounded all flights from Harare”. Another British Airways worker said “the president decided to ground the flights. I don’t know till when”.

Comair spokesman Stephen Forbes said: “We have learnt that there is a possibility of South African operated airlines being grounded in Zimbabwe and as a pre-cautionary measure have decided to temporarily suspend our services to the country whilst the matter is being resolved by the authorities.”

He said customers who have booked on affected flights should contact their call centre.