There is an Shona adage: 'mhosva hairovi', which loosely translated means, 'no one can evade the tentacles of justice'. 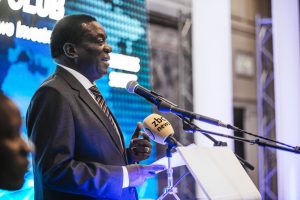 We have witnessed around the world, numerous people being charged, tried and convicted of crimes that they would have committed decades earlier, a sign that no matter how long it takes for a crime to be solved, or how much a criminal believes that they have gotten away with a crime, justice will always catch up with them.

This past couple of months, the world has been captivated with numerous accusations against powerful entertainment celebraties, especially in the United States (US), for alleged sexual abuse and misconduct against female stars – leading to the now popular #MeToo movement.

These powerful entertainment celebraties could have thought that, since these accusations had never been levelled against them for years and years, they had gotten away scot-free with their alleged crimes.

However, this is not how the tentacles of justice usually work, as they were bound to be caught sooner or later.

These allegations have seen the downfall of formerly highly respected individuals, such as Harvey Winestein, and Bill Cosby, and many more.

This brings me back to my home country of Zimbabwe, where the current president Emmerson Mnangagwa, together with his predecessor Robert Mugabe – whom he ousted in a November 2017 coup – as well as several serving and retired military personnel, committed heinous crimes against innocent and unarmed Zimbabweans over the course of the country’s post-independence history.

These individuals, who still enjoy unparalleled power in the country, are responsible for the massacre of over 20,000 unarmed and innocent men, women, and children during the Gukurahundi genocide in the Midlands and Matebeleland provinces.

Furthermore, they are blamed for the atrocities between 2000 and 2008, that saw the killing of hundreds of opposition supporters.

Those who were massacred were reportedly bound and burnt in their homes, some were shot execution style, whilst others were killed in front of their families.

Those, such as Itai Dzamara, simply vanished from the face of the planet without a trace, as they were abuducted in broad daylight, with witnesses describing the abductors, yet no one has ever been charged.

Those who were ‘fortunate’ enough to be spared their lives were asked if they wanted ‘long sleeve’ or ‘short sleeve’, meaning how they would want their arms amputated – at the hands, or the elbow.

There were those women who were raped in front of their husbands and children, whilst some husbands had their private parts cut off and their wives forced, at gun point, to cook and eat them.

The ‘lucky ones’ were brutally beaten up and tortured, yet others were arrested on trumped up charges.

Can the world then say that since Mnangagwa and Chiwenga are promising a ‘new dispensation’, with Zimbabwe ‘open for business’, with a facade of a peaceful environment, then these past gruesome atrocities should merely disappear?

Are we to expect the same treatment to be awarded those powerful entertainment celebraties, such that if they have changed their lives for the better, then they will not be held accountable for their past alleged crimes?

If Harvey Winestein and Bill Cosby can be answerable for their alleged crimes, irrespective of their current ‘good behaviour’, then justice should be seen to be fearlessly and impartially in action when it comes to Mnangagwa and his partners in crime.

No one is above the law, and they should be held to account – or is both local and international law selective, depending on who one is?

Should only those who are are not in charge of countries be the only ones to face the law, or can we expect even the powerful to be fearlessly brought to book as well?

In fact, these malicious politicians should be hauled before the courts before anyone else, as their crimes against their own people are likely to be of such enormous proportions that can never be matched by any individual or group.

Why should someone who was responsible for the massacring of over 20,000 innocent and unarmed men, women, and children be allowed to walk around as a free man, yet someone who kills one person would be hunted down throughout the globe?

How can the international community invite Mnangagwa to the World Economic Forum in Davos, or to other global capitals, and welcomed as a statesman, yet if it were some guy involved in the great train robbery, who goes into hiding after stealing milions of dollars, would be on the international police radar till they die?

What type is justice is this?

Even in Zimbabwe, an opposition leader Tendai Biti can be hunted down, even having the local police and military crossing the border into neighbouring Zambia to arrest him – in defiance of a Zambian court order for him to be considered for political asylum – merely for announcing elections results that were already posted outside polling stations, and, therefore, already in the public domain.

Such a persecuted person can be swiftly arrested, yet the president and vice president of that country, who have the blood of over 20,000 people on their hands live freely and comfortably.

Lest we forget that, in that very same week that the Mnangagwa regime was hunting down Biti on frivolous charges, the military gunned down at least six unarmed people in the capital under the pretext that they were involved in a protest that turned violent, with the burning of cars and stoning of shops.

According to visuals beamed live on international media, the local police had the situation under control with the use of tear-gas and water canons, yet the military stormed onto the scene and saw it necessary to shoot the protestors with live bullets.

How many military men and women were hunted down for these murders, which were caught on camera?

Such are the injustices in Zimbabwe and this world, and as such the international community should now step in so as to put an end to this impunity, where leaders are made to feel that they are untouchable and invincible, such that they can literally get away with murder.

The international community is setting a very dangerous precedence, which will inevitably lead to more and more tyrants who butcher their own people at will, with gross disregard for justice.

Mnangagwa and his comrades need to be brought to book and used as an example that such heinous acts will not be tolerated any longer, thereby, hopefully, a deterrent for other leaders not to repeat such crimes against humanity.

° Kudakwashe Sheddy Marangwanda is a UK based Zimbabwean activist.
Post published in: Featured