I showed my visitor ticket to the Two Oceans Aquarium in Cape Town at the barrier. When it was returned it was stamped in bold red letters: REDEEMED. 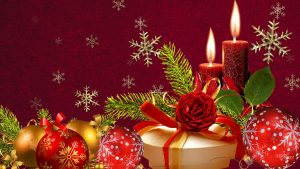 One day I will show my permanent resident ticket at another barrier and I hope it will be similarly stamped.  I have been thinking of religious language straying into, and finding a home in, normal converse and this is an example. Redeemed?

Christmas is like the rings of Saturn.  On its periphery there is the shopping and the tinsel.  Moving inwards, on the next ring there are the staff parties and the pantomimes.  Moving further in there are the family get-togethers and the sharing of presents.  And deeper in are the Christmas themes – enjoying Handel’s Messiah or King’s College carols. And finally there is the planet itself: here, an image of Christmas, the birth of the Redeemer.  A small percentage of humanity stop in homage at that manger in a small provincial town a long while ago.

They know that something extraordinary happened. The four and a half billion years of the universe had been leading up to this moment.  The beautiful reality of life had grown and developed and was seen in many species of animal and plant.  Even the mountains and hills, the sea and sky, heat and cold – all were a celebration, a symphony, of this experience we call life.  Then came the time when life gave birth to choice and that is when things started to go wrong.

Good choices were made but so were bad ones and the latter clogged the ways of the former. The peak of life, the human person, was stuck in the swamp of their own choices.  Their advance, their development, stalled and there seemed no remedy.  But, at the same time, the human person was aware of their longing to break the bonds that held them, while being equally aware it was beyond their power to do so.

There had to be a way forward.  It was written in their bones: life had to achieve its goal.  But it needed the author of life to intervene.  He was divine but he chose to become human to lift his brothers and sisters out of the swamp.  He was born in that manger and grew to contest those bonds.  It was a battle and he seemed to lose it for he too was buried in the swamp.  He shared everything of human life, even its end. But there was one thing different.  He wasn’t just a human; he was a divine human.  That made all the difference.  The swamp could not hold him; he escaped its grip and in doing so he opened the way for life to resume the task of advancing. And this time there would be no limit.  This time the divine human showed the way to move beyond the limits and enter a world that would satisfy, not just the confused longings of their limited feelings and imagination, but a totally new reality they could not even dream of. They would be ‘redeemed.’

A selection of these columns has recently appeared in book form under the title, Beyond Appearances, published by Weaver Press, Harare.  The selection covers the period 2005-08 and readers have already remarked how topical they still are a dozen years on. The author is David Harold Barry, a Jesuit priest who was welcomed to Zimbabwe in 1966 and is still there.  He wrote under the pseudonym Ngomakurira, the drums that sound though the drummers can’t be traced, in the mistaken belief that he could not be traced!

The goal of these pieces is to look at events “with rinsed eyes”.  Try to see what is really happening and what chord does it strike with the reader’s experience.’ …what chord it strikes with the reader’s experience. “Only connect the prose and the passion, and both will be exalted,” (E.M.Forster).  Anyone who writes or teaches hopes to help people change and grow.  But how one says things is as important as what one says. The writer has to choose his words – and punctuation! – with utmost care.

The book can be acquired via Amazon at great expense, or via AFCAST at Arrupe University, Harare, or the Catholic Commission for Justice and Peace, Harare, for a fifth of the price, that is, $5.