Mnangagwa’s nickname was never complimentary. Crocodiles are feared not admired. There is certainly much to fear in the hooded eyes of Mnangagwa – and nothing to admire in the bare-faced lies he told French television when he was interviewed at the AU summit in Addis Ababa. 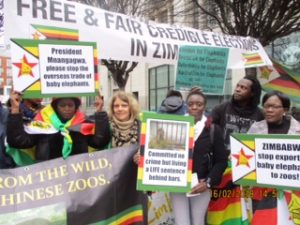 The recent unrest was basically part of the West’s regime-change agenda, he said, engineered by NGOs and the MDC alliance and funded from abroad. The security forces had been the target of co-ordinated violent attacks ‘in every single town’.

As for the women who claimed to have been raped: ‘let them be paraded so we can see them . . . What we are doing is good for our people, good for Zimbabwe’, he declared (see: https://www.france24.com/en/f24-interview/20190210-emmerson-mnagagwa-zimbabwe-protests-interview-mugabe-regime-change-operation).

Well, of course it was good enough for the AU – but the bar there is so low a crocodile can easily slither over it and slurp down another bottle of comfort with his cronies.

Like the AU, SADC showed no interest in the unrest in Zimbabwe, merely blaming sanctions. As UK-based law lecturer Alex Magaisa observed ‘SADC grabs and elevates Zanu PF’s cheap propaganda. No word on the egregious human rights abuses by the security services and Zanu PF sponsored youths, even as they confess. Villains cast as victims, victims as villains. And they expect the world to take them seriously?’ (See: https://bulawayo24.com/index-id-news-sc-national-byo-156036.html).

But Mnangagwa hasn’t persuaded the West. The EU parliament has now recommended tougher sanctions against Zimbabwe. For its part the United States has called on all sides to come together in a national dialogue. It said: ‘in order for such a dialogue to succeed, the Government of Zimbabwe should end its excessive violence and intimidation, immediately release the civil society activists who have been arbitrarily detained, and hold security force members responsible for human rights violations and abuses accountable’.

It said the dialogue should be mediated by a neutral third party but who could that be? The Vigil thinks its time for Cyril Ramaphosa to take on the burden of Zimbabwe. The future of Zimbabwe and South Africa is inextricably linked and, despite his reluctance, the South African President must try and succeed where Thabo Mbeki failed.