[The full pdf report can be downloaded here.] 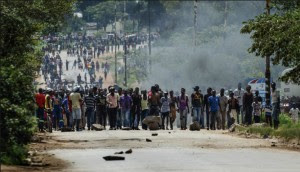 Since the November 2017 military coup, Zimbabwean politics was once again plunged into a legitimacy crisis, a situation exacerbated by the contestations over the July 2018 Harmonised election results, and the violence that followed on 1 August. Notwithstanding the political and economic reformist language of international re-engagement of the Mnanagagwa regime since that moment, the shadow of Mugabe’s authoritarian nationalist politics continued to hover over the post- coup attempt at political renewal. With the economic crisis deepening throughout 2018, the already fragile livelihoods of the majority of Zimbabwean citizens became even more precarious. In late 2018, public sector workers including doctors, nurses and teachers went on strike over their depreciated salaries and working conditions in the face of rising inflation and the persistent monetary crisis in the country. Representing around 27.4 % of formal employment, the largest portion of formal employment in the country, the striking public sector workers presented a serious problem for the functioning of the state. Looking back to the 1990’s it was the public sector strike of 1996 that signalled the onset of the broader trade union challenge to the Government’s neo-liberal policies at a time when formal sector employment, though already on the decline, had a broader base.1 The public sector strikes of late 2018 with the attendant fiscal challenges, once again presented a serious challenge to the professed attempts at fiscal restraint by the ED regime.

However, it was the steep increase of the price of fuel in January 2019 that provided the spark for a new round of popular protests. On the eve of his trip to Russia, Azerbaijan, Belarus and Kazakhstan, Mnangagwa announce a 250% rise in the price of fuel. In response the President of the ZCTU Peter Mutasa and the leader of the #ThisFlag movement Evan Mawarire called for a peaceful stay-away by the workforce from 14-16 January as a protest against this latest round of economic policy interventions.

The state responded swiftly and brutally to the outbreaks of violence resulting from the protests. Of the 17 extra judicial killings reported, the areas most affected were Mbare, Mutare, Kadoma, Marondera, Hatfield, Kuwandzana, Chitungwiza, Glenview and Epworth. The perpetrators were mainly members of the Zimbabwe National Army and the Zimbabwe Republic Police. Of the total 954 arrests, while the effects were nationwide, the areas most affected were Harare (297), Bulawayo (237) and the Midlands (187). Most of the reported human rights violations were in Harare and Bulawayo, while Harare topped the number of killings, assaults by guns shots as well arbitrary arrests.2

In addition, civil society leaders were targeted in the state clampdown. Amongst those arrested or threatened with arrest were: Leader of the #Thisflag movement, Evan Mawarire; Japhet Moyo and Peter Mutasa, the Secretary General and President of the ZCTU; Rashid Mahiya, Chair of the Crisis in Zimbabwe Coalition, who remains in hiding while his family were harassed in his absence; Calvin Famibirai, Executive Director of the Zimbabwe Doctors for Human Rights; and Thabani Moyo, the spokesperson of the Crisis in Zimbabwe Coalition who was also forced to flee the country.3

An accumulation of anger and frustration amongst the largely unemployed youth and those in the informal sector quickly manifested itself on the streets of the country’s cities. As in other countries that have experienced ‘energy protests’ such as Egypt, Myanmar, Mozambique, Nigeria and Pakistan, such protests that start off about material factors related to energy costs ‘quite quickly morph into political complaint, and a critique of authoritarianism and in particular, corruption’.4

The multi-layered nature of the protest issues can in part be located in the broader fragmentation, informalisation and the weakening of labour structures that have been apparent since the early 2000’s.5 Moreover, these forms of protests by young, unemployed youth have begun to indicate different perceptions of the idea of citizenship. For much of Zimbabwean history, the nationalist parties in the colonial period, as well as the political and civic opposition in the post-colonial period, drew on the ‘instrumental and discursive mobilisation of the law to challenge the actions of the state’.6

The continued use of the law to confront an authoritarian state and highly politicised judiciary has been the hall mark of opposition and civic politics in the post 1980 period.7 However the prospect of persistent unemployment and poverty, desperately fragile livelihoods that have displaced and divided families into a global diaspora, and a disturbing loss of hope in electoral outcomes, has begun to challenge these long- held claims of a political imaginary built around making legal claims against a rule bound state.8

[Read the full pdf report which can be downloaded here.]