A Time Line of Military’s Involvement in Zimbabwe’s Politics 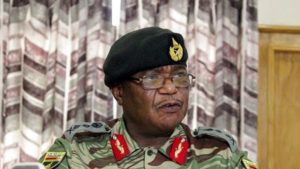 That the Zimbabwe National Army (ZNA) has been and continues to be involved in Zimbabwe’s politics and in disregard of the country’s constitution is quite crystal. Any attempts to refute this is nothing but cheap propaganda.

History has it on record that the Zimbabwe National Army would fight in ZANU PF’s corner whenever the party was at its weakest.

Fast forward to the formation of the main opposition, the Movement for Democratic Change, senior military personnel are always on record that they will not allow the ascendancy of opposition members to the Presidency.

Prior to the 2002 Presidential elections, Zimbabwe’s Military Chief, the late Vitalis Zvinavashe publicly announced that they will not allow opposition leader, Morgan Tsvangirai to run the country even if he wins elections.

August 2007- Prisons Boss, Paradzai Zimhondi said he would take up arms and fight if Mugabe loses the 2008 elections March 2008- The then police Commissioner General, Augustine Chihuri in a statement aimed at the late MDC-T leader, Morgan Tsvangirai and Mavambo/Kusile/Dawn leader Simba Makoni said, “This must serve as warning to puppets. We will not allow any puppets to take charge.”

March 2008- Defence Forces Commander, Constantine Chiwenga threatened to overthrow the constitutional order if President Mugabe lost the 2008 elections.
He said, “Elections are coming up and the army will not support or salute sell-outs and agents of the West before, during and after the Presidential elections. We will not support any one other than President Mugabe who has sacrificed a lot for the country.
When asked about the role of the army in democracy, Chiwenga said, “Are you mad? What is wrong about the army supporting the President against the election of sell-outs?”

On the eve of the bloody June 2008 run-off election, Lieutenant General Rugeje who was deployed in Masvingo said the army will drive people to polling stations to ensure they vote for President Mugabe, “We are soldiers. We do not ask for things but we force things. On Friday, we are going to make sure that you go and vote, not for any person of your choice but for President Mugabe. I am not asking you to do so but will force you to go and vote.”

2009- Defence Forces Commander, Constantine Chiwenga said they will not allow the MDC-T to take over even if they win elections- because the party was foreign driven.

February 2011- A report by the Zimbabwe Peace Project (ZPP) revealed that the military and war veterans were leading a violent crusade against opposition party supporters in rural areas. The report announced that Douglas Nyikayaramba, who was Brigadier General by then, had warned chiefs that they will have a case to answer if President Mugabe loses the 2013 elections.

January 2012- Major General Douglas Nyikayaramba described MDC-T leader and then Prime Minister, Morgan Tsvangirai as a national security threat and suggested that the military should step in and deal with him December 2013- The then Police Commissioner General, Augustine Chihuri said himself and the Zimbabwe Republic Police (ZRP) were not apologetic for supporting the ruling party, Zanu (PF) and implored police officers to ensure Zanu (PF’s) continued to stay in power March 2014- Air Force of Zimbabwe Boss, Perrence Shiri celebrated Zanu (PF’s) victory and announced that the MDC-T (which he labelled as a party of puppets) was sliding into extinction.

Shiri was speaking at the burial of the late Wing Commander Brian Muchenje January 2018- Zanu (PF) Political Commissar, Rt Lt General Engelbert Rugeje laid bare the army’s involvement in elections in a warning to Gutu villagers. He narrated his involvement in politics while he was still a member of the Zimbabwe National Army and said, “We are getting towards important elections this year. I came here in 2008 when things were bad. I don’t know where Masvingo had got this spirit and I came and sorted things out. I came back again in 2013 and led the campaign team and I moved around the province addressing rallies and the results were impressive.”

December 2016- Masvingo Minister of State, Josiah Hungwe threatened to deploy the army if Zanu (PF) loses the 2018 elections. He said, “Yes we can go to war. We can hire our army. Our soldiers can come in to help us. Don’t forget what Rugeje (then Lieutenant General) did in Masvingo in 2008. We can call him again in 2018.”

December 2017- Presidential Advisor, Chris Mutsvangwa said, “We are going to campaign for Zanu (PF) along with our army which is the best in the world and also traditional leaders”
Recent reports of the army campaigning for Zanu (PF) in rural areas, as well as the continued militarization of the Zimbabwe Electoral Commission (ZEC), are disturbing and certainly take away prospects of free, fair and credible polls.

In August 2018-The army was deployed in Harare Metropolitan province to ‘assist’ the Zimbabwe Republic Police in controlling citizens who were demonstrating peacefully following revelations that the Zimbabwe Electoral Commission was attempting to rig elections in favour of the ruling ZANU PF party. Six innocent people were killed by the army.

In January 2019-The army was deployed to deal with citizens who protested against the increase in the cost of living. It is reported that the army is still leading operations in most communities. Cases of women abuse and human rights are reportedly increasing.