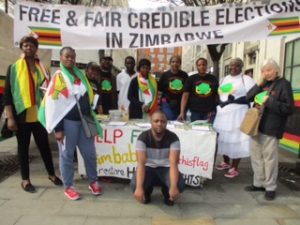 Hawkins said: ‘Ultimately the solution to Zimbabwe’s problems is political.  You can fiddle around with the economy as much as you like but you are not going to get a lasting solution without some form of political and social consensus.’

Mnangagwa has so far rejected bilateral discussion with Chamisa, insisting that the MDC should join in the joint talks he is having with other opposition parties. But Professor Hawkins, speaking at a meeting of the Institute of Directors, said there was no point in the MDC being grouped with people who got less than 0.5% of the vote last year whereas the MDC, he said, took something like 44%.

Hawkins said an agreement between Zanu PF and MDC had become inevitable because of the deteriorating economic situation and predicted an economic collapse if Mnangagwa government failed to build national consensus.

‘We have a very serious issue. We have an extremely fractured and polarised society. We have a rural electorate which supports government and we have younger and urban voters demanding change. How this plays out no one can tell. All we can say is I think the social and political climate will probably worsen as unemployment rises and it will, as poverty increases and it will.’ (See: https://www.thezimbabwemail.com/economic-analysis/solution-to-zimbabwes-problems-is-political/.)

Everyone at the Vigil, even if their families at home are not in danger, has been anxiously following news of the cyclone disaster, which has been given wide coverage here. We have been inspired by those who have rushed to help the victims and the generosity of so many others.

Some Zimbabweans who are now living in Mozambique have kept in touch with the Vigil over the years and we have been worried about their horse sanctuary in Vilanculos near Beira. They report: ‘Thankfully for us and the horses we were totally unaffected but Pat had survived the cyclone in 2007 and during the 250 knot winds he had to untether the horses and let them go. Interestingly enough they made their own plan they moved to higher ground and formed a V formation with their bums and withstood the wind.’ Their website is http://www.mozambiquehorsesafari.com/.