Zimbabweans in the UK have enthusiastically engaged in the Brexit debate on whether the country should pull out of the European Union. Many have passionately taken sides – most, it appears, keen to stay in the Union. 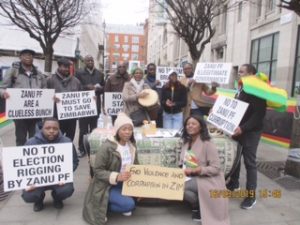 Since the dangerously narrow victory of the Brexiteers in the referendum three years ago, there has been fierce debate on what would be best way for the nation to leave, not surprising since most members of parliament disagreed with the electorate.

But despite the differences there has been remarkably little violence – in contrast to the situation in neighbouring France, which has seen months of riots against the policies of President Macron, or the clashes in Germany involving the emergent right wing party opposed to Muslim immigration.

Despite the irritation and regret of the other 27 members of the EU at the UK’s difficulty in reaching agreement on the type of post-Brexit relations it wants with them, there has been an unexpected side effect: fascination with the Britain’s parliamentary system.

Television audiences in Germany, particularly, have been transfixed by scenes from the House of Commons, where 650 members of parliament have crowded in for boisterous, close-quarters debate. This audience has found it to be high drama, not just something to be exasperated by. It is democracy in action, not some dry, token, neat, pre-determined affair characteristic of hygienic European legislatures.

We Zimbabwean exiles in the UK still don’t know how this drama will end. But following President Ramaphosa’s visit to Zimbabwe we are profoundly depressed about how Zimbabwe’s situation will turn out. Ramaphosa’s refusal to even meet MDC president Chamisa seems to rule out hope of his playing a role in bringing about a dialogue between the rival parties in Zimbabwe. Not much democratic debate there – more the usual Afro-elite self-interest..

The Brexit debate has embraced all voices and tried to reach a consensus. This used to be known in Africa as Ubuntu. In the UK it has indeed taken time – but not nearly as long as Zimbabwe’s failure to fully implement the 2013 constitution . . . And unlike in Zimbabwe, the UK has an economy which is buoyant, with employment at a record high, while Zimbabweans face the total collapse of the vestigial health service, where gynaecological oncologist Bothwell Guzha of Parirenyatwa Hospital said ‘I am just seeing patients, make a diagnosis and send them away to die.’ See: https://uk.reuters.com/article/uk-zimbabwe-doctors/zimbabwe-doctors-say-patients-dying-due-to-drug-equipment-shortages-idUKKCN1QU2HT and https://www.youtube.com/watch?v=kPsHSV1Wpe0.