By what recruitment and retention strategies are the adherents of churches of false prophets seduced? What socio-economic and political conditions manufacture both the perpetrators and the victims, asks Tinyiko Maluleke. 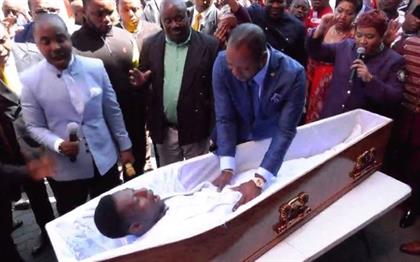 Earlier this week, we got to know about the fraudulent resurrection of a dead man, as Pastor Alph Lukau of Alleluia Ministries tried to gain the ultimate competitive advantage over his rivals in the lucrative prosperity gospel industry.

In this piece, as I have already ventured above, I wish to consider some possible explanations for such bizarre acts as the eating of grass, the gobbling of petrol, the nibbling of live reptiles and squirming rodents, the fraudulent raising of the dead and fake healings.

By what recruitment and retention strategies are the adherents of these churches seduced? What socio-economic and political conditions manufacture both the perpetrators and the victims?

How do we explain the seeming emotional immaturity, cognitive bankruptcy, spiritual ineptitude, social psychosis and the financial illiteracy that cause members of our own species to be debased and defrauded so tragically and so spectacularly?

While these churches may use a few educated celebrities and prominent people for their wealth and magnetic pull, they make most of their steady and predictable income from the 17 million South Africans on social grants, the nine million who are unemployed and from the millions without medical aid.

In order to search for possible explanations, I provide below, a tentative anatomy of one church that played in the top league of the prosperity gospel industry – Angel Ministries.

Early one morning in 2016, the residents of the rural village of Ngcobo, woke up to the sight of strange and curious graffiti appearing on the giant boulders hanging up on the local hill of Khalinyanga. Below an ominous square, painted in white, with a blood-red stripe of paint running halfway through, were written, the words, “the end of 1260 days, it’s a new beginning” and then the words, “Jehovah God angel forces” and finally in isiXhosa, the words, “Izwi lika Jehovha limingunaphakade 7angels” (the Word of God abides for ever).

In this not-so-subtle and rather invasive way, the Seven Angel Ministries erupted into the lives and imaginations of the people of Ngcobo.

Its founder, Siphiwo Mancoba had died in 2015. But before their old man took his last gasp, his seven sons – Banele, Xolisa, Ephraim, Benjamin, Philile, Thandazile and Phuthumile – snatched the spiritual baton. With the encouragement of their mother, Nombongo Mancoba, they rebranded and re-launched the church as the Seven Angels Ministries.

The church had many weird beliefs such as: that their deceased father would soon walk back from the dead, that they themselves were angels straight from the heavens, that the South African Constitution and state were evil and worthy of disobedience, that education was Satanic and that the CRL Rights Commission was a ‘thief’ and a ‘girlfriend of Satan’.

Let us continue to proffer a few possible explanations.

Like the unsolicited adverts that flicker on the internet page, Angel Ministries ensured that they were ‘in-your-face’ and ‘top-of-mind’ for the residents of Ngcobo and passers-by alike, through their graffiti, writ large, up on the hill.

As part of their retention strategy, they established on their premises, a permanent home for their members. Amongst the residents, were some dozen or so kids with no birth certificates, prohibited from going to school or interacting with government departments. Several members of the church who had resigned their jobs also formed part of the insular community of up to 200 souls who lived in the squatter-camp-like compound.

In a country where many government, municipal, private, tribal, media and NGO institutions are either dysfunctional, errant and/or not trusted, Angel Ministries offered a parallel universe in which things seemed to work. They also cultivated a strong in-group versus out-group logic, so that their members accepted that the ‘logic’ of the in-group was not only different from, but superior to the logic of all out-groups, otherwise known as the logic of the world.

With power completely centralised in the articulate leader, Banele Mancoba, and diffused among his six brothers, the toxic, strongman model of leadership was fully operational. The leaders were flamboyant, snappily dressed and blessed with many materialist possessions as well as sex slaves, some as young as 12.

When it came to civil disobedience and disdain for social norms and values, the leaders led by example. By peddling a narrative of an evil world which was about to end, they encouraged members to give all they were and and everything they had to the ministry. Several pension pay-outs, cars, salaries and proceeds from hastily sold goods and properties were handed to the church leaders, who seemed to worship themselves as much as, if not more than, they claimed to worship God.

Once they reached the point of having nothing to lose in the world, the members of Angel Ministries, were ready for the bloody end. And yet, a bloody end was not inevitable. Government had known about the possibility of violence for at least two years before the horrific events that occurred shortly after midnight on 21 February 2018, when seven police officers plus one SANDF soldier were shot dead, allegedly by a gang comprising members of Angel Ministries.

When the police later went to the church premises to investigate, a shootout occurred, after which the seven dead bodies of members of the Angel Ministries church, floated upon shiny little pools of blood.

Like the flamboyant leaders of prosperity gospel churches, some of our political, corporate and public sector leaders share an obscene fondness for being revered, a penchant for the finer things in life, a predilection for the abuse of power and of their followers and subordinates.

Could this explain, at least in part, the legal and theological subterfuge which is often spewed out every time calls are made for the charlatans to be charged, arrested and jailed?

“Give the gullible their democratic right to be gullible,” they say. Except that this is often said in a logic and tone similar to that with which former apartheid minister of police, Jimmy Kruger spoke, after the murder of Steve Biko by the police, when he said, “prisoners in South Africa hav[e] the democratic right to starve themselves to death.”

Is it perhaps because the majority of the victims are black and/or female – in a society where the pecking order remains racial and patriarchal – that state officials tasked with doing something about these blatant assaults on the dignity and rights of South Africans, are more keen to tell us what can’t be done as opposed to what can be done?

For comic relief, in the wake of the Alph Lukau fake resurrection video, South Africans have, typically, taken to humour on social media platforms. But soon, the laughter may be rudely interrupted by the next bloodbath, coming soon, at a church near you.

– Prof Tinyiko Maluleke is a senior research fellow at the Centre for the Advancement of Scholarship at the University of Pretoria.