Those that have experienced the misrule and tyranny of Robert Mugabe's Zimbabwe have a duty to correct the false eulogies and hagiographies now being peddled about that country's former president. And the only lesson to learn form Mugabe is how not to run a country, writes Kevin Malunga.

Those that have experienced the misrule and tyranny of Robert Mugabe’s Zimbabwe have a duty to correct the false eulogies and hagiographies now being peddled about that country’s former president. And the only lesson to learn form Mugabe is how not to run a country, writes Kevin Malunga.

The manner and place of Robert Mugabe’s death is of particular significance.

While his compatriots wallow in decaying health facilities, he chose to die in that well known citadel of efficiency, Singapore.

As I walked around (as a tourist) in sweltering Marina Bay during a convenient flight layover in Singapore last Sunday, Mugabe lay dying in the swish and world class Gleneagles Hospital somewhere in the vicinity.

According to rates published on the hospital’s website, in Singapore dollars, and based on Mugabe’s estimated recent 150-day booking at R80 500 per day, his stay would have cost just over R12m.

The undisputed narrative of his entire presidency has been that his bills are footed by the state. If the state didn’t pay this bill the question must be asked: where did he get the money? As I took photographs of the glistening, swanky skyscrapers and impeccably clean streets of Singapore, I wondered why he had not chosen to be treated and die at home, as most patriotic statesmen would have done, especially those credited with liberating their countries?

I received my answer as to why he shunned his own facilities very quickly. Junior doctors have been on strike since March of this year and, for about 20 years, most of the country’s public health facilities, from major referral hospitals such as Parirenyatwa Hospital in Harare to Mpilo Hospital in Bulawayo to the small regional hospitals and municipal clinics, have faced endless shortages of drugs and equipment, power cuts and food shortages.

So if Mugabe had been treated at one of his own country’s facilities he would long have been dead probably at 75 and not 95.

Why Mugabe was a despot

Predictably the death of Mugabe has brought with it much excitement and reignited interest in a man who is considered Zimbabwe’s founding father. For most Zimbabweans though that mantle is shared with, and some would say actually belongs to, the late ZAPU leader, Joshua Nkomo, who wasn’t such a polarising figure.

Much has been written about Mugabe’s legacy in the past three days, with a few obituaries being repetitive hagiographies which attempts to sugarcoat the brutal legacy of a man who publicly declared that he had “degrees in violence”.

Most have been frank assessments of a flawed legacy. While Mugabe has guaranteed himself a place in the annals of history as a liberator, he has also secured an ignominy as a despotic head of state who shirked all forms of accountability.

The Zimbabwe that Mugabe inherited in 1980 was highly industrialised, with a highly productive industrial sector that assembled cars and made the finest clothes along with all manner of consumer goods for the rest of the world.

Alois Mlambo in his seminal 2017 article entitled From an Industrial Powerhouse to a Nation of Vendors: Over Two Decades of Economic Decline and Deindustrialization in Zimbabwe 1990–2015 traces the collapse of Zimbabwe’s economy over two decades. In summary he posits that from being the second most industrialised country in Sub-Saharan Africa at independence in 1980, Zimbabwe’s economy declined rapidly to a point where the country ranks among the poorest economic performers in the region.

The three pillars which had underpinned the country’s vibrant economy, namely agriculture, mining and manufacturing, suffered greatly from poor government policy choices, resulting in the near collapse of each of the sectors and massive unemployment.

As a result, he observes, an estimated 90% of the Zimbabwean population was unemployed by 2015, a figure which holds firm. People are forced to eke out a living in the informal sector, mostly through vending of second-hand clothes and other basic items. With regard to the manufacturing sector specifically, the sector had all but collapsed by 2015, as companies either folded or relocated to escape the country’s harsh economic climate.

Mugabe a victim of Western conspiracies?

There is a Utopian, romantic fantasy which mostly reposes among YouTube and Twitter ideologues who believe that Mugabe was sabotaged by sanctions for his anti-Western stance.

Zimbabwe fell apart because of a range of factors, but I would argue that the Mugabe government is 80% responsible for economic and socio-political decline, with the rest the result of external factors such as capital flight and crippling debt.

There are three reasons for Zimbabwe’s collapse.

Firstly, the ill-conceived smash-and-grab approach to land reform was Mugabe’s knee-jerk response to a bruising defeat in a constitutional referendum in 2000. I would use the term “land reform” if the programme had yielded positive results and had not been used to enrich the inner circle of Mugabe and ZANU-PF. 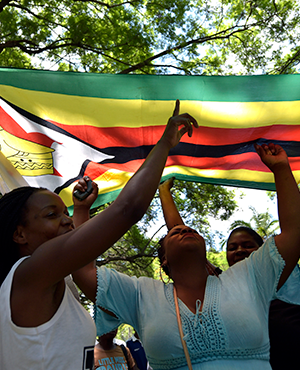 To this day large swathes of highly productive farms remain fallow and overgrown by bush. Granted, there are some success stories among new farmers, but the overall statistics from various monitoring bodies point to an increase in transfer of land ownership but a decline in production.

Granted, there were commitments made in terms of the Lancaster House agreement in 1979, which Mugabe may have been correct to argue had not been honoured by the British. Those who defend Mr Mugabe throw the numbers about that seem impressive.

According to the 2010 UN Zimbabwe Country Report, a total of 10 816 886 hectares had been acquired since 2000, compared to the 3 498 444 purchased from voluntary sellers between 1980 and 1998. This would have been laudable if had not come with so much hunger and suffering highlighted by the frequent grain shortages during Mugabe’s tenure.

Secondly, the independence of state institutions was desecrated. The Reserve Bank was treated like a personal piggy bank by the first family which would use state resources to finance shopping junkets to the same Western capitals they condemned in searing rhetoric.

In fact, so frequent and so ostentatious were such shopping trips that the former first lady, Grace Mugabe, was dubbed “Gucci Grace”. She later acquired a high-speed PhD at the University of Zimbabwe under circumstances that are still questioned by the university community.

The judiciary was also not spared. In 2001, during the time of the land grabs, independent judges led by former Chief Justice Anthony Gubbay were asked to resign, ostensibly because there was a perception of bias on their part. The moment they left, Mugabe packed the courts with judges deemed sympathetic to him.

Air Zimbabwe, a fully functional airline, also fell victim to the constant commandeering of planes by Mugabe, who could have scheduled commercial flights altered if he needed a lift. A fleet of almost 20 in 1980 was down to three verifiable aircraft in 2017, two of which have allegedly gone missing. And at the time of his ouster, in November 2018, Mugabe’s son-in-law was conveniently serving as the airline’s chief operations officer. Almost like what happens at a South African state-owned company.

During Mugabe’s tenure, the notion of “independent state institutions” became a misnomer, as anyone who dared exhibit any traits of independent thinking, as we often do in South Africa’s oversight institutions, lived to regret it or didn’t live at all.

Thirdly, Mugabe always had to be in charge. Anyone who thought differently had to be eliminated. After winning independence in 1980, Nkomo and ZAPU soon became his enemy. He was brutal, often threatening to “crush” his enemies. And he did not mean “crush” in a metaphorical sense. He meant it literally.

No apology or acknowledgement of the Matabeleland masscres

There are ample examples of where Mugabe threatened to destroy Nkomo and his comrades, including my own father, Sydney Malunga, who was jailed on spurious grounds.

When pressed to account for this violence Mugabe, who had earlier bragged about having degrees in violence, referred to Gukurahundi as “a moment of madness”. He never apologised, right up until his comfortable death at Gleneagles Hospital in Singapore. The rise of Morgan Tsvangirai and the Movement for Democratic Change from 1999 presented the most formidable challenge for Mugabe and he responded to it with brute force, breaking every rule in the book to stay in power. He rigged the 2002 election to remain in power and then lost the election six years later, with Tsvangirai capitulating to form a Government of National Unity. More than 250 people lost their lives in the subsequent violence.

Mugabe, though, was a liberation fighter. Some have sought to take that away from him, arguing that he only joined up after ZANU was formed in August 1963 by Ndabaningi Sithole, Enos Nkala, Leopold Takawira and others.

Whatever his flaws in strategy, Mugabe, as a liberation fighter, was resolute and very clear in his mission, namely to topple white minority rule which relegated Zimbabweans to third class citizens in their own country.

But his power hungry, controlling personality was always bound to be a liability. It soon manifested itself in the form of a personality cult which was propped up by his inner circle and, in turn, the country. The result was that no one challenged him when he ran the country into the ground. In fact, he was often cheered on. The result was a 37-year grip on power which was comically mediocre at the end, with him sleeping in meetings and reading the same speech twice as he was past the age of 90.

The roll-out of free education after 1980 is held as testament to Mugabe’s own love for education.

But that is a highly contested legacy because, although many hate to admit it, the uncomfortable truth is that the brutal Ian Smith regime bequeathed to Mugabe flawless socio-economic infrastructure that included good schools, roads, agriculture and industry.

Mugabe had no plausible excuse to mess it up.

In fact, Julius Mwalimu Nyerere, president of Tanzania, warned him that he was inheriting the jewel of Africa and he better not mess it up. All he had to do was take the baton and take the country to greater heights. He didn’t. Instead he crushed the baton and turned it into a weapon to suppress political dissent, killing and maiming along the way.

As the misinformed and feigned tributes for this highly compromised leader continue to flow we, who know better, who watched the decline of the land of our birth, cannot be told that this evil man was a good man.

We cannot be told to forget that he led a project that murdered thousands and displaced millions from the land of their birth.

We cannot be told that a power hungry megalomaniac was a pious Pan-African patriot or an economic reformer.

Those of us who have a lived experience of Mugabe’s Zimbabwe have a duty to ensure that the false eulogies delivered in the name of Pan-Africanism are corrected.

He was a formidable liberation fighter, but a terrible head of state and an even worse democrat.

As someone who has worked for seven years to assert good governance and accountability in South Africa as deputy public protector (with a degree of success against formidable odds) I can safely say that the overarching lesson that African leaders and Africans in general should learn from Mugabe’s life is how not to run a country.

His attitude to diversity of opinion, fair elections, human rights, ethnic inclusion, economic policy, race relations and land reform are certainly not to be emulated.

** Advocate Kevin Sifiso Malunga was born and raised in Bulawayo, Zimbabwe. He is outgoing deputy public protector and writes in his personal capacity.