For me this is the big question of our age. There was a time when with very little basic education you could get by in the world. It was not long ago. 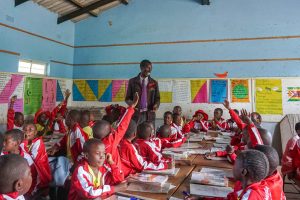 My mother was born in Canada in 1912. She grew up in a log cabin and her father worked as a lumberjack. She went to a primary school which was one room in the forest and her family then migrated to South Africa looking for a better life.

They struggled and I do not think she got much more education in any formal sense – but she could read and write and was basically very bright. When my father became an alcoholic in his early 30’s and with 4 children in tow, my mother taught herself shorthand and typing and went out to work as a secretary. In a few short years she was promoted to the position of PA to the CEO and earned more than my father who was slowly recovering. She became the bread winner and we survived as a family.

Today, if a girl does not get a decent education you might condemn her to a life as a second class citizen or worse. In our modern economy a good basic education is the very foundation of life after school. In the Jewish Community, they have learned how to live as minorities in many countries, often in a hostile environment. But wherever they have gone they have formed a Jewish Board of Deputies to look after their own. As a result, no Jewish boy or girl has an economic ceiling on their educational opportunities. If you are bright and talented (not always the same thing) then you got the best education money could buy. This was irrespective of the wealth or otherwise of your immediate family. You never meet an unemployed or indigent Jew because they look after their own.

The consequence is that the Jewish Community around the world are known for their enterprise, wealth and significant accomplishments. More Jews have won Nobel prizes for just about everything than any other racial group. Israel, a tiny slip of a country surrounded by hostile States and comprising mainly desert, flourishes and is known the world over as a center of excellence in science and technology.

In this country, I grew up in a system that separated us by racial definition. As the child of a “white” family I got an education in a State funded school that was as good as any in the world. My year is littered with Professors and men and women who have done well all over the world. In retrospect I now appreciate the quality of my primary and secondary education even though I came from a “poor white” family. I was the only child to go on to University and to do so I had to pay my own way, but once I got there I was the equal of any other student because of my State funded basic education.

In parallel the Rhodesian Government built up a school system for nonwhite children which was about the same size as the system for whites and to the same standard. Outside this small elite system of State funded schools were thousands of schools build by the Missionaries who provided 90 per cent of all education for the “black” community. Staffed by many brilliant and dedicated men and women these schools not only gave the majority some education but also produced some of our brightest and best.

The consequence was that at Independence in 1980, we had an educated population that valued the process and sacrificed everything so that their children might get an education as well. Over the next 20 years the Zimbabwe Government spent more than they earned on health and education. Striving to give everyone a decent start in life, but this growth in these services outstripped our capacity to pay for them at the level required and as a result standards slipped and by 2000 we were unable to maintain the system given the slow growth in the economy.

In the last half of the 20th Century the nature of work changed and with it the demand for basic education followed by specialization. Developed States were able to cope with these changes in the economy and meet the need for education but developing countries found themselves slipping behind. Countries like Zimbabwe had a system they could not fund properly, salaries were low and working conditions for trained teachers were pretty basic, to say the least. So the gap between State funded systems – like the very ones that gave me a first class basic education, and the private schools began to widen. Private schools were better resourced and the Parents kept the schools on their feet, they helped their children with their schoolwork and put pressure on the schools to excel.

The result was inevitable, the people who could afford a good school were able to choose their schools and make sure their children were well taught. In this small system, the children of the wealthy got a world class education. The Churches were able to extend this system to some extent because they had teachers who would work for less and be just as dedicated. The consequence has been that Zimbabwe has been able to maintain a small system of education – largely Church and private, which can compete with the best in every field. Top Universities visit our schools every year to look for talent and often provide them with financial assistance.

The children of the majority had to accept an education in overcrowded class rooms and with a staff that was under paid, overworked and demotivated.  The result was inevitable – standards, secured at so much cost after Independence in 1980 began to slip. Today it is common to come across young people who, after 10 years or more in school, are unable to read or undertake basic numerate skills.

Our passion for education has not diminished and families make great sacrifice for their children’s education. The Minister responsible told me last year that in his view the Diaspora sent back US$1,2 billion to help with the education of their children and relatives at home. But it is not enough. The tales of children going to school and sitting on the floor because there is not enough room for furniture. Children who cannot read or write after 9 years of primary education. Something is wrong.

My own feeling is that we have to make sure that every child has a decent education – just as I got when I was growing up in a single parent family and a mother who had little basic formal education. I got it because I was white and received preferences. As a country we have to strive to make it possible for every child to go to school and never to experience a poverty ceiling. That is possible, but it takes a great deal of effort.

The first priority for me is to give Parents more of a say. School systems work best when the Parents have a say in how their children’s schools are managed. My own preference would be to make all Government Schools, Community Schools run by the local Councils and the Parents who would elect School Boards. Education is always better when the parents are directly involved. Teachers should be employed and paid by the school Boards and State funding should come in a means tested system of State support for individual children. No child should have to stay out of school because their parents cannot pay the fees.

The role of the State should be to provide support for children whose parents cannot afford school fees and to supervise educational standards and set exams. Parents should elect School Boards and secure funding to make up the difference between State funded grants per child and the real cost. All teachers and school heads should be privately employed. The Diaspora can be expected to play its role, already they contribute more to basic education than the State itself. It is also my view that the international Community should support basic education and tertiary education so as the make it possible for every child, especially the girl child, to get a decent basic education.