The dire situation in Zimbabwe has been getting of a lot of attention in the British media – particularly since the visit to Zimbabwe by a UN representative who warned that Zimbabweans were on the verge of man-made starvation. 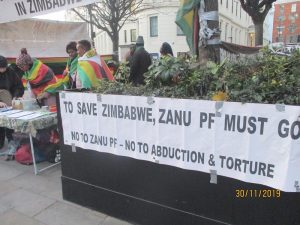 On top of this, we learnt that senior doctors have joined hundreds of their junior colleagues in a mass walkout, speaking of ‘a silent genocide’ caused by the dire conditions in hospitals. For its part, the European Union expressed concern at the slow pace of political reform, saying democratic space was again being curtailed.

The Times newspaper nevertheless found space to print a letter from Foreign Affairs Minister, Comrade General Sibusiso B Moyo, in response to an article about Zimbabwe the paper carried earlier. The article in question was about the latest vicious police behaviour towards MDC supporters in Harare.

Moyo’s vacuous letter didn’t deny the egregious behaviour of the police. He said the government knew ‘more work is required to bring the security services up to international standards’. He went on: ‘Here too international co-operation is welcomed. We also welcome the opposition’s input on these issues’. What a bare-faced lie. The police violently crush a peaceful gathering at MDC headquarters and Moyo blithely speaks about welcoming the opposition’s input. The truth is the police are given free reign to act with impunity.

Take another incident which took place last week: a drunken inspector of police, six police thugs, the baseless arrest of the President of the Association of Rural Teachers and then a vicious police assault on his legal representative at Harare Central police station. A day in the life of Zimbabweans . . .

MDC Senator David Coltart, who was Minister of Education in the Government of National Unity, gave a graphic account of the events. Himself a lawyer, he had a personal interest: the lawyer so disgracefully treated while fulfilling his duty was his son Douglas – the second time he had been assaulted by police in recent months while representing clients.

Senator Coltart continued: ‘The assault of a legal practitioner acting in the course of his professional duties is unacceptable and a serious breach of criminal law and the constitution of Zimbabwe. In the normal course of events such an assault would result in the suspension and possible dismissal of the police officers involved, upon being proved guilty of the offence. In Zimbabwe police officers in the last few years have been guilty of far worse assaults on civilians than the one perpetrated against Coltart. For example the assaults by police officers of innocent old men and women in central Harare on Wednesday the 20th November 2019 resulted in far more serious, potentially life threatening, injuries being inflicted on victims. Not a single police officer has been suspended or charged for numerous unlawful assaults on civilians during the last few years.’

Senator Coltart commented: ‘In my 36 years of legal practice in Zimbabwe I have never heard of any lawyer who has been assaulted trying to represent his or her client. This conduct of the police is accordingly a serious deterioration in Zimbabwe’s human rights situation. It is also incumbent on churches, civic groups and the international community to speak out against this vile conduct. Zimbabweans are rendered defenceless by an increasingly rogue police force and if the international community in particular does not act against this conduct the culture of impunity within the security forces of Zimbabwe will grow. This in turn will result in all Zimbabweans being rendered ever more vulnerable and abuses of fundamental human rights will escalate.’

FOR THE RECORD: 9 signed the register.