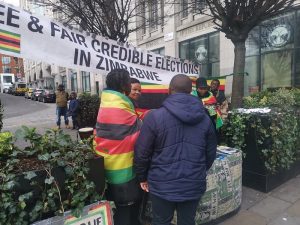 A comment on the Zimbabwe Situation website made a similar point: ‘The Zanuvirus will continue to cause havoc just as it has done for 40 years since the infection took hold.’

Chamisa called for concerted efforts to remove Zanu PF from power, saying ‘let’s get the job done. Zimbabwe is too richly resourced to be this underdeveloped’. He urged Zimbabweans – wherever they are – to clap 40 times for change at 6 pm (see: https://bulawayo24.com/news/national/183384).

In the UK Zimbabweans have become accustomed to clapping at 8 pm on Thursdays to show their support for the National Health Service staff dealing with the coronavirus and some themselves dying from it. Among the victims this week was Rutendo Mukotsanjera, a single mother aged 45 who leaves a daughter Chichi, 12, orphaned with no family in the UK. Ms Mukotsanjera worshipped at the Renew Church in Utoxeter whose members are caring for Chichi and have raised more than £30,000 for her future.

Zimbabwe appears so far to have escaped lightly from the pandemic, although the future looks bleak despite President Mnangagwa repeating in his Independence Day message that Zimbabwe would be ‘an upper second’ economy’ by the end of the decade – laying himself open to a 20 year prison sentence he has threatened against anyone responsible for fake news!

What makes this aspiration even more unreal is a statement by the National Chamber of Commerce that a quarter of Zimbabwe’s formal jobs and three-quarters of informal ones would be wiped out by the impact of the infection. It predicted that the economy would contract by 9% this year (see: https://bulawayo24.com/news/national/183589).

The economy has not been helped by the government’s inept handling of bankrupt Air Zimbabwe which last week sent its employees on unpaid leave. Not surprising as a Boeing 777 acquired in January has only now taken its first flight for the airline – not a scheduled one but to Addis Ababa for maintenance . . . (See: https://www.zimbabwesituation.com/news/air-zimbabwe-flies-boeing-777-to-maintenance-after-3-months-on-the-ground/).

While the Boeing sat on the ground in Harare. The government spent hundreds of millions of dollars over budget on foreign travel expenses. They included hiring a private jet from Dubai to fly to Zimbabwe to take Mnangagwa on a 40 minute local trip (see: https://www.newsday.co.zw/2020/04/ed-foreign-trips-bleed-treasury/).