With the election fast approaching, increasingly reckless statements are being bandied about, raising the political temperature to fever pitch. The latest insane comment came from  - of all people! – a bishop, or should we say a so-called bishop. 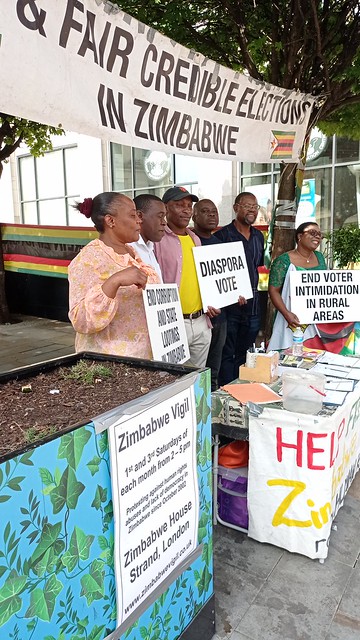 He is Zanu PF member Abton Mashayanyika of the Habbakuk Apostolic Faith Mission in Mberengwa in the Midlands. He went as far threatening opposition leader Nelson Chamisa and his family with death. A video taken at a rally shows him saying: ‘When we say down-down with Chamisa, we mean he should be killed. Do you all understand the meaning? Down with CCC (Citizens Coalition of Change), down with Chamisa and his
children.’

Police spokesperson Assistant Commissioner Paul Nyathi said the matter was being investigated at local level. Zanu PF spokesperson Christopher Mutsvangwa refused to comment. But the CCC acting spokesperson  Gift Siziba said: ‘We do not take this lightly chiefly because there have been numerous attempts on the life of president Chamisa. It is to this end that we call for our able police service to move with speed and detain Mashayanyika and charge him and his accomplices with death threats and calling for violence.’

Lawyer Alec Muchadehama said Mashayanyika should be charged for inciting public violence. He said the police response showed how they applied the law selectively, only targeting people who are perceived to be anti Zanu PF. Certainly the police did not hesitate to take action against CCC legislators such as Job Sikhala and Godfrey Sithole who have been incarcerated at Chikarubi maximum security prison since 14th June on charges of inciting violence following the murder of an opposition activist MoreBlessing Ali.

The Vigil has seen a message from Job Sikhala expressing their gratitude for the support fellow CCC activists have given them. ‘Please pray for us’, it says. The Vigil doubts that Bishop Mashayanyika will oblige! (See: https://www.newzimbabwe.com/my-reward-is-in-heaven-jailed-sikhala-pens-an-emotional-letter-to-zimbabweans-asks-them-to-turn-sunday-a-national-day-of-prayer/).

Steve Hanke, an American economics professor who has taken a close interest in Zimbabwe over the years, says: ‘Zanu PF has more in common with a criminal organisation than a political party.’ In an interview with CNBC Africa he said: ‘“You have got criminals running the country.’  Political lecturer and analyst Eldred Masunungure said Hanke’s assertion was spot on. ‘This is a party in government, deeply corrupt and has all sorts of predatory conduct, both in politics and the economic issues of the country; but it remains a political party. It’s an ugly animal, yes.’ (See: https://www.newsday.co.zw/2022/07/death-threat-on-chamisa/.)

The Zimbabwean economist Eddie Cross, a former member of the Reserve Bank Monetary Committee, has also criticised the government. In an interview with the state broadcaster he said the country’s economic problems were caused by ‘entrenched interests whose selfish actions are almost a form of state capture.’ (See: https://www.zimbabwesituation.com/news/mnangagwa-captured-by-advisers-cross/.)

Despite a history of successfully rigging elections, Zanu PF still betrays anxiety as polling day approaches. The party’s youth league executive member Phenias Makombe has tried to settle nerves by assuring members that sources at the Zimbabwe Electoral Commission have told him the party will win the 2023 election. Although voting is some time away, Mnangagwa is apparently mysteriously already leading with at least 3.8 million votes, while Chamisa is at a mere 20,000 (see: https://www.zimbabwesituation.com/news/zec-told-us-we-are-leading-in-2023-elections-says-zanu-pf-leader-claims-mnangagwa-already-has-3-8-mln-votes/).