Zimbabwe Electoral Commission (ZEC) chairperson Justice Priscilla Chigumba said a picture of her wearing a scarf which is associated with President Mnangagwa was taken before she was appointed ZEC chairperson. 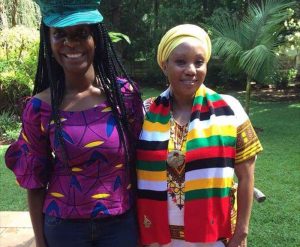 Chigumba could not however give the specific date or month when the picture was taken saying it was taken before she became ZEC chairperson. However, Celia Rukato the designer of the Mnangagwa scarf posted the picture on 5 February 2018. Chigumba said the scarf was designed to revive national consciousness and it was given to her as a present by the designer. Said Chigumba:

…the scarf which is now associated with a particular political candidate, that scarf was designed by a brilliant Zimbabwean girl who then approached a group of us when I was a High Court judge to say, “look I’ve designed a scarf in an effort to build national consciousness”. She didn’t only design the scarf, she designed a couple of caps that said Team Zimbabwe, she designed a cloth. She was trying to revive national consciousness and pride in our country and she actually gave me that scarf as a present at that venue where she was addressing us to say “Look I have designed a national dress. I’ve designed a national cloth. I want to build national consciousness. Do you as women judges, do you as a woman judge, do you want to support me?” And I did want to support her and I was very grateful for the present she gave me and I took a picture…Yes I did take a picture and this was before I became the chairperson of the Zimbabwe Electoral Commission. I was a High Court judge.

Chigumba also added that ZEC commissioner Dr Qhubani Moyo thought the picture was photoshopped because they know she would never jeopardise ZEC’s image. Moyo was quoted by the State owned Chronicle saying the image is fake and meant to create an impression that Zec is partisan. Said Chigumba:

With regards to what I think about the statements made on my behalf by members of my staff, they obviously when they saw the picture they couldn’t believe it because they know very well how I’m always very careful around issues of perception. So in their view they obviously thought “It is obviously a photoshop because our chairperson would never do that”.