As Zimbabwe follows the UK into lockdown to try to control the spread of coronavirus, we can tell from our own experience here that Health Minister Obadiah Moyo was mistaken when he claimed early this month that Zimbabwe was ‘100% prepared’ for an epidemic 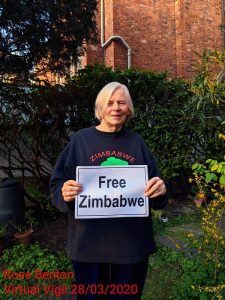 As Zimbabwe follows the UK into lockdown to try to control the spread of coronavirus, we can tell from our own experience here that Health Minister Obadiah Moyo was mistaken when he claimed early this month that Zimbabwe was ‘100% prepared’ for an epidemic (see: https://www.voanews.com/science-health/coronavirus-outbreak/zimbabwe-says-100-percent-prepared-coronavirus).

Just how unprepared the country is was shown by the wretched treatment received by the broadcaster Zororo Makamba, the first Zimbabwean to die from the virus – even though he had the advantage of being the son of a business tycoon and Zanu PF politician.

30-year-old Zororo returned from a visit to New York on 20th March with what was thought to be a slight flu.  When he developed a fever his doctor recommended that he go to the country’s designated health quarantine facility, Wilkins Hospital in Harare, which turned out to be woefully ill-equipped to deal with serious infections.

His elder brother Tawanda Makamba described a catalogue of deficiencies. If the outcome wasn’t so tragic, some of the incidents could have been slapstick farce. For instance: the hospital had no ventilator to help Zororo breathe. The family managed to obtain one but the hospital could not use it because it had an American plug. Tawanda went and bought an adaptor but the hospital said they still couldn’t use the ventilator because there were no electricity sockets in his room. So he went and bought an extension cord but they refused to use it!

Tawanda said the family appealed to Health Minister Moyo who promised all sorts of things and delivered nothing. Tawanda said the nurses were afraid to handle the situation. ‘It even got to a point where they were telling us that we were bothering them.’ He went on: ‘At the end, before he died, he kept telling us that he was alone and scared and the staff were refusing to help him to a point where he got up and tried to walk out and they were trying to restrain him’.

He warned: ‘Right now they don’t even have water at Wilkins. So if you come here to be treated for coronavirus there is absolutely no treatment you will get. You will die’. (See: https://www.thezimbabwean.co/2020/03/makamba-family-fumes-over-zororos-death/).

With many countries imposing restrictions on flights and foreign visitors, the Zanu PF financier Kudakwashe Tagwirei is taking over two private hospitals in Harare to be upgraded for the elite now that they will be finding it difficult to go abroad for medical treatment. MDC Vice-President Tendai Biti said there was: ‘no limit, shame, remorse or elasticity to the evils of this regime’ (see: https://www.zimlive.com/2020/03/26/outrage-over-coronavirus-hospitals-for-the-political-elite-in-zimbabwe/).

In the UK we are constantly warned to wash our hands with soap and to avoid being within two metres of anyone in a public space. We have seen little sign that similar advice is being followed in Zimbabwe and observers say it is futile to expect informal traders to let their families starve.